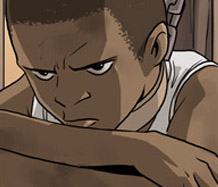 Jivi Flask [dʒiːviː] is a fourteen year old Crescian boy formerly held prisoner by purported slaver gang the Red Berry Boys. Currently in the city of Ethelmik. Being the only captive who has not undergone the procedure that had left his fellow captives comatose, Jivi's concern for their welfare and his own was palpable.

Very little is known about Jivi beside the fact he was captured while sleeping in a ditch. Repeated dreams and flashbacks of his a "Captain" apparently named Regina Flask, speak towards a troubled history.

Jivi was at some point working for his uncle, who owns a winery. The two had a fight and Jivi ran away; on the way home, he was ambushed and captured.

While held captive by the Red Berry Boys, Jivi was spared to kill rats. While in the crypt, Jivi briefly met Cara, and tried to comfort her with candy. Later, he met Matty but was later angry at him for allowing his captivity, however unwillingly.

He had escaped after the Red Berry Boys stopped in an Ethelmik warehouse. In the attempt, he deceived one of his captors (Ephsephin) into ingesting armed rat traps. Also in the attempt, he received severe lacerations on his back from another of his captors, a two-toe (Cutter). Later that day, he aided wright Mathis Quigley and his son Matty from an assault from the Red Berry Boys and their recently hired employees Anadyne Frummagem and Knock-Me-Down Frummagem by taking control of Quigley's construct Uaid and using it to break off the warehouse roof. Because of this, Quigley is indebted to him. He fell into the care of Ethelmik citizens Rahm the Raptor, and his wife Iori, the latter of which treated his wounds.

He also bumped into Sette during his escape.

Accompanied by Matty, he notified Crescian Peaceguard Captain Emil Toma of important information, and was locked in a nearby prison cell for safety reasons. He was broken out by Sette Frummagem, who, after being urinated on, struck an agreement for aid in exchange for their freedom, which she granted with the aid of high explosives. Upon having returned to Rahm's residence, he notified Quigley of the agreement.

Although seemingly a bit doubtful of his own morality, Jivi possesses a fairly strong one; he has frequently attempted to aid his fellow slaves in spite of the risks of doing so and saved Mathis Quigley. He also stood up for Matty When Quigley was yelling at him.

Perhaps as a result of his troubled past, Jivi is very independent as well as intelligent and brave enough to get himself out of sticky situations.

He also has a habit of calling people by their ethnicities or quirks rather than their actual names, such as calling Timofey "ghost" before correcting himself. Sometimes these names may be slightly offensive, but it is implied that Jivi had, at one point, done a lot of travelling and he is otherwise unprejudiced.

Jivi has proven himself quite resourceful. He was able to escape from the Red Berry Boys more or less on his own, and was able to pilot Uaid.

He also seems to have some talent in making rhymes.