From Unsounded
(Redirected from Duane)
Jump to: navigation, search 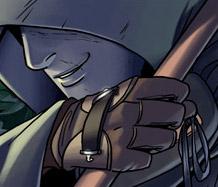 Duane Adelier [du'an a'de.li.e] is Sette's traveling companion, and a figure of some mystery. Ostensibly he is a talented wright of Aldish heritage, but he is also no longer possessed of a living body. Duane describes himself as a galit [χa'lit], though Sette is more inclined to label him a zombie. Working in Sharteshane as a scrivener, Duane was blackmailed by Sette's father into accompanying and protecting the girl as she commenced an enigmatic journey west.

Duane harbours an intense hatred of Cresce, warning Sette multiple times not to lead them too far west and into Crescian lands. His short temper seems to grow even shorter when faced with Crescian opponents, and Duane is at his most violent when at odds with them.

Visual flashbacks at moments of extreme emotion hint towards a strange and bloody past.

In life, Duane was a citizen of Alderode and a soud, or a member of the Aldish Gold caste. He had a daughter named Mikaila, who seems to be the origin of his protective attitude toward children such as Sette or Cara. He also had a wife named Leysa and a son named Simon. Duane and his family all had strawberry blonde hair and green eyes. He had a younger brother named Lemuel Adelier but unlike Duane and his family, he had yellow eyes.

Duane is known to have been a soldier, and in the comic, a flash-back is shown with Duane preaching as a cleric, and later, in council with government officials and high members of the temple like Councillor Bodie and Shadwe Grandvin. He wears thorns, or distinctly colored gloves indicating that he is a first-class wright, and he was considered for the title of spell composer, making him among the best wrights in the country. Duane's full title is stated by him in Chapter:02 The Red Berry Boys. It is Duane Adelier, Fourth Motadwe of the Temple of Song in Durlyne Ginnal- and then he is cut off by Sette.

In the side story Interior Emanations, Duane was romantically involved with a Silver third option, which was forbidden for both of them. Because of his academic excellence, he was allowed to stay in the academy, but because the Silver was expelled, he decided to leave for the army and, later, the clergy.

Duane has a strong sense of honor, stating that he tries to fight fairly, though ironically his strong morality is sometimes contradicted by instances of sudden, extreme violence when facing Crescians or anyone who harms a child. However, he shows a great willingness to help others in need. Duane's honor is further evidenced by his turning down some prostitutes' services with the explanation that he is married when he has not even seen his family in years.

Like many Ssaelit, Duane emphasizes gender roles to some extent, though not because he believes women are less capable than men. Rather, his view on the matter is merely practical, as prior to his death he seemed only to encourage his daughter to conform with societal expectations in an effort to quell her unhappiness. Duane offered to teach his daughter pymary, for instance, and his first reaction to catching her attempting a glamour was to explain what she did wrong instead of scold her for stepping out of her supposed role as a girl. Duane has also never called Sette out for being untraditional.

Perhaps Duane's most notable trait and vulnerability is his keen desire to protect children - particularly his prickly charge Sette. He vowed to have revenge on the murderers of a young girl named Cara and was willing to slightly deviate from helping Sette to stop the Red Berry Boys from harming more children.

Duane is occasionally haunted by reminders and images of his bloody past and deceased daughter. He also keeps a journal, in which apparently is written his history with the Crescians and his life before his "death." He has not left his old life entirely behind him and still considers himself married.

Sette Frummagem - Duane is in charge of protecting her and is in actuality her guardian, though she tends to act otherwise. However, he finds that Sette bears a striking physical resemblance to his deceased daughter and thus has a soft spot for the otherwise quite unbearable criminal; the two girls were so similar in appearance that Duane would sometimes call Sette Mikaila at night. Although he is often frustrated by Sette's outward lack of morality and her repeated lying, it is also Sette who calms him during his fits of anger and contrasts with his occasional bouts of pessimism. Duane also shows genuine concern for her safety and has begun to warm up to her; he was happy to see that Sette had seemingly achieved what she had traveled to Stockyard's for.

Nary-A-Care Frummagem - Nary apparently blackmailed Duane into accompanying Sette to Cresce, though Nary did not disclose that last bit of information to him. Duane does not consider Nary a friend, as the wright told Sette that he would kill her father if the Frummagems were "playing" him.

Leysa - Duane's wife. They seemed very happy together, though Leysa was not as supportive of their daughter learning pymary.

Mikaila - Duane's daughter. He loved her dearly and was proud that she was a tacit caster, and after being convinced of her ardent wish to be a wright, he broke tradition and offered to teach his daughter pymary in secret. She apparently resembled Sette in appearance.

Duane has shown himself to be immune to casual injury, including being run through with a sword, eaten by an enormous tree monster, and having a finger bitten off. In addition to displaying competence with pymary and being an extremely good wright, Duane possesses excellent hand-to-hand fighting skills, talent with a staff (though his sword skills are terrible), preternatural strength, and a rare ability called tacit casting.

An eternal hunger torments Duane's corpse-body, flaring to life and muddling his judgment when confronted by blood or raw meat or flesh. In addition, Duane loses his mind after sundown, becoming a simple zombie with a hunger for flesh until morning. While in this state, he can be commanded by Sette, with the help of a necklace given to her by Lord Winalils.

Duane's eyes and larynx are pymaric replacements that enable him to see and speak without the original organs. He conceals his undead state with a glamour that borrows the beauty Aspect from his natural environs. However, the glamour is broken by eye contact, so he wears a hood that hides his eyes. His inability to keep the glamour under eye contact may stem from an emotional problem of some sort, as after some encouragement from Sette, he was able to maintain the glamour without any issues, and only had to resort to hiding his eyes after being flustered by some prostitutes.

Plod with a Soul

Duane's undead state is a subject of great confusion to everyone who encounters him and realizes what he is; an undead being like a plod, but with an intact personality, mind, and soul. It is illegal for plods to be given personalities, and no one believes that capturing a mind and soul intact in a dead body is possible. However, Bastion claims to have done just that when he created Duane's current state. There is a tether attached between Duane's soul in the khert and his undead body.

Delicieu, Bastion's master, was working on a way to give 'a soul' to two-toes. Cutter, the two-toe who claims to be named Delicieu, also claims that Duane would not exist without him. However, Cutter/Delicieu's apparent knowledge of some aspects of what makes Duane function coupled with envious fascination suggests that Bastion has improved or altered his master's technique. When Delicieu was about to perform his (presumably successful) soul-attaching experiment on Cutter, he mentioned pain and lucidity being necessary. Duane certainly had plenty of pain when Bastion tethered his soul to his dying body.