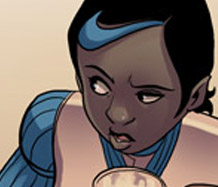 Elka is Captain Toma's right hand man, and a low-ranking Lieutenant in the Crescian Peaceguard. Her specialisations are pymary, wright suppression, and baton-based melee combat. Fiercely loyal to Toma, she's at the same time tired of chasing slavers so far from home and eager to get back to Cresce.

She's a good friend and fiercely loyal, with a practical head on her shoulders. But she's got a bad temper and very little patience, and she can be something of a bully - not necessarily out of meanness, but out of mild amusement at watching people squirm. [1]

Elka has the blessing of a very stable and bland back story. Unlike Toma whose roots are humble, Elka was born and raised in the capital to military parents. She grew up wanting little more than to become one of her Majesty's personal guards, but it's a long road. She's on the right track though. She excelled at the Academy, served her time at the DMZ and patrolling the workcamps, and finally was assigned to Toma in a manner that will be detailed next chapter.

Elka is about as nationalistic as Duane, and just about as vocal about it. She's seen a lot of the continent at this point and thinks most of it - Sharteshane in particular - is pretty sick. She's not a "Cresce should be running this whole place!" sort, but she's very concerned about outside elements worming their way into her country and sees the Peaceguard as a fine defense against that. She's passionate about Cresce and about her Queen, and has a special hatred of traitors.

Her pymary is pretty good, but it's not a passion for Elka; it was simply the wisest choice for a woman who wanted to never be at a disadvantage in a fight, no matter her opponent. She's very physical in spite of it. She trained in hand-to-hand combat as well and has a hardened oak baton she whips out sometimes for skull cracking.

Doesn't mean she doesn't have her soft side. But you gotta earn it.