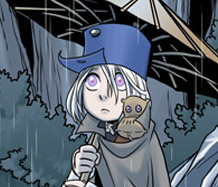 Matty Quigley is an eight year old Aldish boy currently traveling with the the Red Berry Boys. Matty is son to Mathis, and is completely blind. A pymaric named Chitz sits on his shoulder and acts as a primitive seeing aid, revealing the rough, plain shapes of the world immediately around him. This leaves Matty at once colour-blind, texture-blind, and bereft of depth perception, but enables him to "see" in pitch darkness.

Matty is perfectly fluent in both Continental and Tainish, preferring to speak the latter when conversing with his father. He's at ease with their large construct, a mechanically altered mountain ogre called Uaid, referring to the creature as his best friend. More than anything else at present, Matty seems keen to leave the west behind and venture forward to coastal Sharteshane and the eastern sea. His father's criminal activities leave him ill at ease.