From Unsounded
(Redirected from Quigley)
Jump to: navigation, search 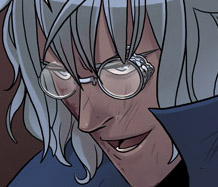 Mathis Quigley is a twenty-three year old wright of Aldish heritage currently in the employ of the Red Berry Boys. Exercising an illegal form of pymary known as gruftgramary, Quigley sells his skills to the highest bidder, though he does seem to possess some semblance of morality, as evidenced by his hard bargaining with Starfish over the latter's violence towards children. Indeed this caused Quigley to leave the slavers' service before the story began, and it's only Starfish's promise of a lucrative reward that entices him to rejoin the gang.

Quigley is of the hethllot class, colloquially known outside Alderode as a Plat. It is almost unheard of to find Plats outside of Alderode, suggesting that he left his homeland under extraordinary circumstances.

Traveling with Quigley are his son Matty and an unconventional conveyance called Uaid.

Quigley was raised in a hethllot-community in Alderode. There he was known as a quiet, unpopular lad who mostly kept to himself. He was sent to study Pymary in a city at age six and was recruited as a bird dog at age fourteen. Only a little while later he was married to Vienne and their son Matty was born. Together with Vienne he found the remains of an adolescent mountain ogre, which Vienne then used to build Uaid. After she was murdered he reclaimed Uaid from the municipal office in a suicide mission and fled Alderode with the construct and his son. He found refuge in Cresce for a while but fled again for fear of Uaid being confiscated.

Quigley's Story was written into a play by Anya Hirz. For this reason he is quite well known in Cresce.

He had dealings with the Black Tongues at some point, and they helped him with the construction of Chitz. However, he refused to join them afterwards.

Quigley's Pymary often takes the shape of light-blue insects, a possible reference to the short-lived Plats sometimes being insulted as "insects". This also applies to his Pymaric, an adorned shawl which summons an insect swarm.

Although not entirely devoid of compassion, Quigley can be more pragmatic than moralistic. While he at first refused to aid the Red Berry Boys in transporting child slaves, he quickly changed his mind when offered a great sum of money.

Typically polite, Quigley can still have a bit of a temper, especially with Matty. This can extend to physical violence against his son, and it appears a frequent behavior.

Quigley does not value national ties very much, as he had no qualms with attacking Duane despite their both being Aldish and hunted by the Cresce. This may stem from Quigley's general isolation in his childhood.

Matty Quigley - Like any other father, Quigley cares a good deal for Matty and did not hesitate to attack Starfish when Matty was insulted. At the same time, Quigley does find his son a nuisance sometimes and the two clash occasionally, usually over Quigley's sometimes unethical decisions. From the side story Orphans, however, it is implied that Quigley had or has difficulty showing affection for his son, and Matty's total lack of resentment towards his father seemed to deeply unsettle the man. Presumably, Quigley eventually managed to come to terms with his new life and his son.

Jivi - Quigley is grateful to Jivi for saving them and even offered to take Jivi with them to Sharteshane. Quigley doesn't seem to really mind Jivi's occasional unpolitically correct statements, knowing that the fourteen-year-old is kind and unprejudiced at heart.

Vienne - Although there is minimal explicit mention that the two were necessarily happy together, and the two even argued frequently, Quigley loved her deeply and losing her drove him to attempt suicide.